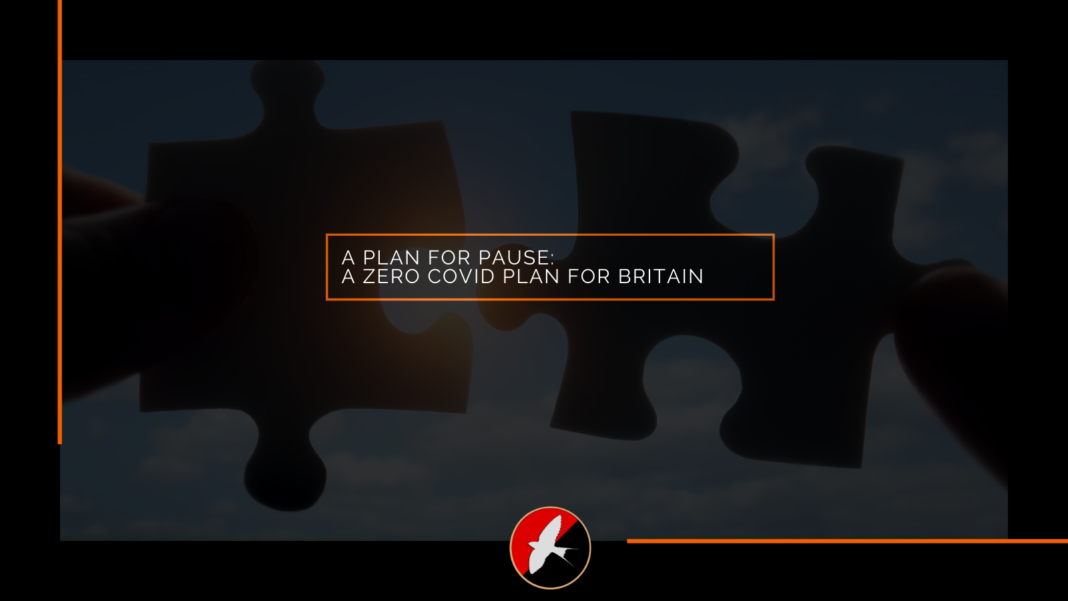 We have outlined a number of positions during the pandemic which have been consistent, but we have not yet brought them together in a single statement.

In contrast to Labour or the Conservatives, we would not seek merely a “circuit breaker”, given that this only seeks to “control” the virus as opposed to defeat it.

We cannot put all of our eggs into the vaccine basket. The risk is too great – both to the public’s health, and to the long-term health of the public via economic effects.

Therefore we propose an “economic pause” – and the pursuit of the zero-COVID strategy that this country should, in our view, have pursued from the very beginning.

This economic pause would enable social interactions to be massively reduced for a period of 40 days, followed by a reopening period lasting another 40 days. The reopening would be phased, with sectors ranked highly in terms of economic criticality, and which have the least required social interactions, reopening first. A special independent expert committee would be formed to rapidly draw up short-lists of sectors. The final decisions of that committee would be that: binding on government.

Schools would also physically close, but shift to distance learning as much as is feasible. This is a difficult task, but we believe it is not, with the advice & support of teachers & educational experts, impossible. There would be a cost to learning, but that cost is not as significant as the cost of lost lives in those children’s extended families. Trauma – and personal risk for those children who are vulnerable – is of greater concern, as is concern for teachers & teaching assistants, whose health must be a priority.

We believe also that students who were handed grades without actually sitting exams should be allowed free “resits” as soon as is feasible – under whatever conditions are necessary to achieve this as rapidly as possible, as safely as possible. This would be optional; students would be free to retain their existing grades if they so choose.

Our borders would be closed to non-essential travel – “essential travel” would include the movement of goods, of course – for the duration. Essential travellers would be tested – likely more than once – and would need to pass through quarantine. The duration of the quarantine would be set based on the latest data; in concert with testing, this may not need to be as long as 14 days, but it also might.

We would introduce an emergency Universal Basic Income to support every resident of this country throughout the crisis. There can be no cracks to fall through; any crack is a public health risk. This would be set at a fair level to ensure everyone would be able to meet costs throughout the crisis. Everyone would receive the same payment, regardless of prior employment.

We would also introduce three moratoriums, each lasting two weeks longer than the shutdown (as a method of supporting the economy as it reopens). The first would be on rent. While this would cause landlords some difficulty on paper, we believe this would be – fairly – offset by UBI. Given almost everyone would be experiencing loss of earnings, and everyone will be having that loss equally offset, it seems to us that this is the fairest way forward. These moratoriums would also overall reduce the level at which the eUBI would be set at: everyone’s costs should be temporarily lowered.

Meanwhile, businesses and home owners would not be treated unfairly either; we would introduce a moratorium also on mortgages.

This would offset the immediate impact on the most vulnerable businesses & the most vulnerable jobs, and, after COVID is suppressed, more targeted packages of support for specific industries could be determined on the basis of actual real world conditions. An independent commission could be set up to facilitate supportive tax breaks or direct bailouts where necessary, if necessary, to ensure the British public are not gravely harmed.

The third moratorium, of course, would be on evictions.

In turn, in order to ensure that businesses do not unfairly benefit while operating through the time period – for example, grocery delivery services – we would temporarily increase tax on still functional businesses, to help offset the cost of both UBI and other programs. While this may seem unfair to some, the still functional part of the economy should continue to contribute to the cost of operating society during the pause.

We believe this package, taken as a whole, would enable people to remove themselves from work safely without significant financial penalty, while also not significantly penalising businesses.

This means that social contacts would be effectively limited. We would also limit house to house contact via guidance; people would be told to maintain sensible social distance when outdoors, and asked to only take trips that were absolutely necessary. Intergenerational interactions would be asked to completely pause wherever possible, as a means to attempting to curtail the further spread “upward” through age groups during the pause.

This would not include contacts for necessary purchases, such as when shopping, although people would be encouraged to order online where possible. UBI would help support this, as people who would normally be unable to meet the minimum spend requirement would be more confident of not being out of pocket by buying further in advance.

We advocate working closely with the food supply sector to support them logistically through what would be a difficult time to fulfil all orders.

We are open to discussion and suggestion on how best to approach enforcing the methods of limiting social contact, rather than blunt force of fines or other oppressive action; it would be wise to listen to sociologists on this particular topic, and to seek to inform the public in a grown-up, adult manner, rather than patronising to them – us! – as a whole. It is worth remembering that as measures became harsher, but less clear, people have broadly become less willing to cooperate.

We must be utterly clear: there is no space for “nudge” in consensual governance.

Therefore we hold that it is utterly vital that communication be clear – mature – and honest.

Once the 40 days are up, and re-opening commences, a new nationalised track & trace service can move into action. Small-scale clusters can be rapidly dealt with by track and trace, and we can ensure that they never escalate to the extent that larger interventions are necessary by keeping our borders closed to countries who do not have their outbreaks under control, by ensuring quarantines for all travel regardless of purpose, and by testing all entrants to the country, as well as all people who wish to leave.

In addition, we advocate for state-operated isolation facilities, staffed by people carefully vetted for health conditions who can voluntarily accept the risk in exchange for fair, high pay. In this fashion people can safely isolate away from their families – and ensure no community spread once clusters are detected. Clusters can be entirely ringed, isolated from their communities, and will therefore dead-end, maintaining our COVID-free society as we open up fully, slowly, cautiously.

In this way, 80 days from commencing, we believe it can be all but guaranteed that the crisis is over.

And knowing that this would be the deal from the onset, we find it hard to believe the public could not be persuaded to simply accept the difficulties – along with the support – and pull together, while forced apart, to solve this crisis once and for all.

All of us, together – in mutual aid and support.

As it should’ve been from the very beginning.